Thank you for Subscribing to Aerospace and Defense Review Weekly Brief

Heath Niemi, VP of Global Sales & Blake Sawyer, Chief Commercial Officer & Ruben Martin, Owner & CEO & Wayne McAuliffe, VP, Programs & Tae Kim, COO & CFO
When the agility of a quadcopter is married with the flight endurance of a fixed-winged aircraft, a versatile Unmanned Aircraft Vehicle (UAV) is born, which draws the merits of both aircraft configurations for mission-critical applications while offering vertical take-off and landing (VTOL) capabilities. The journey toward perfecting such a machine dates back to World War II, when, VTOL capable aircrafts were just being conceptualized.

However, mastering such flight capabilities has been a herculean task for OEMs worldwide, let alone perfecting them for UAV applications. “Treading into some of the versatile drone applications, customers expect autonomous equipment independence along with various configuration requirements that suit their business use cases,” begins Heath Niemi, Vice President of Global Sales, Martin UAV. For drones classified as group three or below—which is 1320 pounds and lower—vertical take-off and landing is a critical functionality, in addition to safety, connectivity, payload, time of flight, and operation-specific use cases that govern close-up or small-space launch scenarios.

The Lean Approach to UAVs

Martin UAV addresses the requirements, as mentioned earlier, through its brainchild – the V-Bat. The revolutionary UAV offers VTOL capabilities, a 350-mile and 15,000ft altitude range, 8+lbs payload capacity, and 90 KTS speed. V-Bat’s equipment and runway-independent characteristics offer various customizability options for clients, within its 9ft*8ft*2ft skeletal structure. The autonomous flight capabilities of V-Bat enable clients to pre-program flights, all the while allowing them to make minor adjustments. And, it eliminates the need for large numbers of operators to govern the flight of the vehicle through a crew of two that controls the UAV. The lean nature of V-Bat enables clients to cut down costs, contrasting traditional drones that lug around heavy equipment while conducting use case-specific flights.

Such versatility proves to be the differentiating factor that sets Martin UAV apart from the rest of the OEMs in the UAV space; the company serves as the vehicle for mission-critical applications across defense, public, and federal use cases with multiple payload and control customizations. From infrared sensors to surveillance reconnaissance systems, radios, or even 4G LTE payloads, Martin UAV customizes its V-Bat UAV for numerous areas of applicability. Companies aspiring to employ UAVs also need to interconnect their software with ground control stations while taking into account the encryption protocols, equipment integration, and network configurations.
These time and resources intensive processes would eventually pose a difficult challenge to organizations.

For example, consider the case of a defense organization that required the integration of discrete radio equipment with definitive encryption needs. Upon engaging with the client, engineers at Martin UAV integrated the proper radio configuration needed for this particular use case, consequently abiding by the guardrails placed by the defense client. 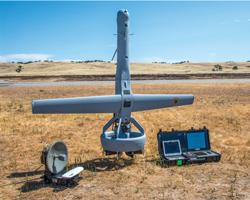 A majority of such engagements require educating clients on newer developments within the industry to maintain a technological edge among peers. “When we engage with clients for various projects, we build long-lasting relationships; wherein, we educate them on utilizing the appropriate technology for specific use cases. Purchasing drone equipment is very different from buying something off the shelf and owing to that very reason, we work with the customer hand-in-hand, helping them solve crucial business problems through our technology,” adds Niemi. Collectively, Martin UAV strives to achieve operational excellence for clients, all the while adhering to their diverse business requirements.

While engaging with such clients, Martin UAV--through V-Bat--nurtures equipment independence. While conventional UAVs require launchers, recovery systems, and operation-specific equipment, V-Bat operates independently on a small footprint all the while offering the performance characteristics of a full-loaded UAV. This nimble footprint of V-Bat improves the operability of the UAV, without needing an expert maintainer and requiring additional training. The drone can also hover mid-air, allowing the operator to perform specific missions, owing to its protected, ducted tail fan design and autopilot that helps in stabilizing the aircraft. This design element allows for mid-air transition from hover to forward flight settings depending on the requirement. “We can have multiple hover waypoints. The V-Bat is fast to build up and fast to take down, very efficiently,” continues Niemi. “Time is an important factor for any mission.”

Adhering to this design language, V-Bat retains the unmatched flight efficiency offered by the traditional fixed-wing aircraft used for long-distance endurance missions through its infrastructure-independent design, thereby sufficing the need for vertical take-off and landings operations. Controlled using a modular line of sight data-link controller that features 100+ km of range, V-Bat is capable of extending its range indefinitely across the UAV’s linear flight trajectory through ground control stations as the aircraft exits the scope of the controller. The aircraft is maneuvered using a laptop interface that fits into a portable hard case or a tablet ground control station while operating on a 183cc two-stroke engine (packing 15 horsepower), thereby negating the effects of infrastructure-dependent UAVs.

While these features are impressive, how do they fare in a real-time scenario?
The flexible design of the V-BAT allows it to be configured to both government and commercial use cases. The drone already meets the regulatory requirements of the Future Tactical Unmanned Aerial Systems (FTUAS) evaluation. For industrial applications, the drone can be configured to accommodate hyperspectral imaging devices in its payload. This helps in monitoring oil leaks and spills and can also be used by agriculture companies to keep an eye out for changes in the ecosystem.

Martin UAV also offers an 18-pound electric version of the V-Bat, the most agile aircraft of the V-Bat family, which can be scaled up depending on the use case and payload requirements. The company is planning to enhance the endurance and payload capabilities of this aircraft, which could be potentially scaled up to 300, 500, and even a 4000-pound UAVs.
“V-Bat is fast to build up and fast to take down very efficiently,”

Comprehending various configurations of V-Bat and their applicability, it is easy to recon how the family of aircrafts has become one of the highly-sought-after UAV technologies in existence. Pillared upon innovation, creativity, and hard work, the V-Bat team tailors its fleet of aircraft to numerous payload, flight, and use-case-specific applications, thereby building commendable relationships with clients. “We are constantly innovating up the ladder of versatility by cashing in on the newest and most promising advancements in the UAV landscape,” prides Niemi. This purpose-driven engineering mindset empowers clients not only with the latest and greatest technological developments but with carrying out mission-critical operations within their businesses. For instance, Martin UAV’s tail design proves to be a game-changer for multiple use cases within government and public sectors while offering the capability to add different kinds of payloads on top of the aircraft. Besides, the company’s lean managed control structure allows it to make decisions based on the need of the hour.

Such a lean approach, combined with Martin UAV’s inclination toward technologies such as autonomous flight opens up newer avenues for clients seeking autonomous flight controls, wherein, the drones fly to a designated waypoint without the interference of a manual operator. Furthermore, possible applications of artificial intelligence could enable drones to avoid and react to enemy fire and pick out safe spots to land during flight. Essentially, these functionalities would allow operators to pre-define flight parameters, payload requirements, and ground control tasks for complete autonomy. They also pave the way for the operation of multiple drones simultaneously, thereby creating a swarm of drones for the pre-determined commercial applications. The aircraft’s small footprint further improves logistics and ease of operation, in turn, simplifying the training functions for clients. These design advantages, coupled with unmatched scalability, redefines the modus operandi of the UAV industry, offering clients a plethora of options for discrete use cases.

All in all, Martin UAV’s drones pack the punch of fixed-wing aircraft while offering the maneuverability, agility, and hover capability of a quadcopter.
- Royce DSouza
April 02, 2020 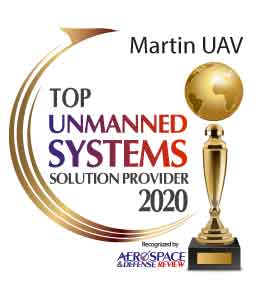 Description
Martin UAV offers an infrastructure-independent, autonomous, vertical hover-capable UAV that addresses discrete use cases. The revolutionary UAV offers VTOL capabilities, a 350-mile and 15,000ft altitude range, 8+lbs payload capacity, and 90 KTS speed. The autonomous flight capabilities of V-Bat enable clients to pre-program flights, all the while allowing them to make minor adjustments. And, it eliminates the need for large numbers of operators to govern the flight of the vehicle through a crew of two that controls the UAV 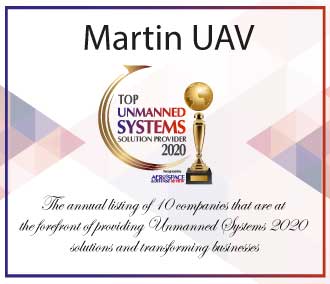 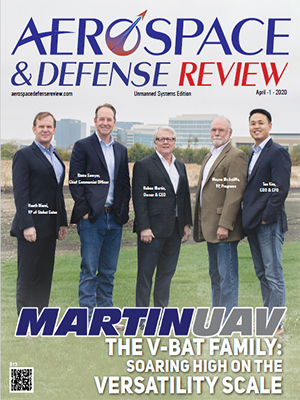